MacroAir installed large HVLS fans inside a Wisconsin brewery to keep patrons and workers comfortable and keep costs down.
[Courtesy of Macroair]

The craft brewery business is hot, and so are its boilers. So like those who manage warehouses, dairy barns, automotive service bays, and airport terminals, this Wisconsin beer maker found a way to cool down without adding air conditioning.

One of the ironies of enjoying a nice cold beer is that it takes a 200-degree boiler to brew it. That presented the Central Waters Brewing Company with a dilemma since the company’s public taproom is adjacent to its operations—warm and all. Fortunately, the solution for craft beer fanatics is in MacroAir’s large HVLS fans, which rotate above them largely unnoticed at Central Waters.

Denny Wandtke and Anello Mollica, principals at the Wisconsin-based company, wanted to serve customers their finest brews where the action itself happened, with shiny, hot stainless steel boilers in full view. Having the boilers close to the patrons created an uncomfortably warm environment that Central Waters wanted to eliminate. But the company stands on solidly green operational principles—for example, it has solar panels on the roof and uses recycled-content bottles—so mechanically cooling the space presented an issue. 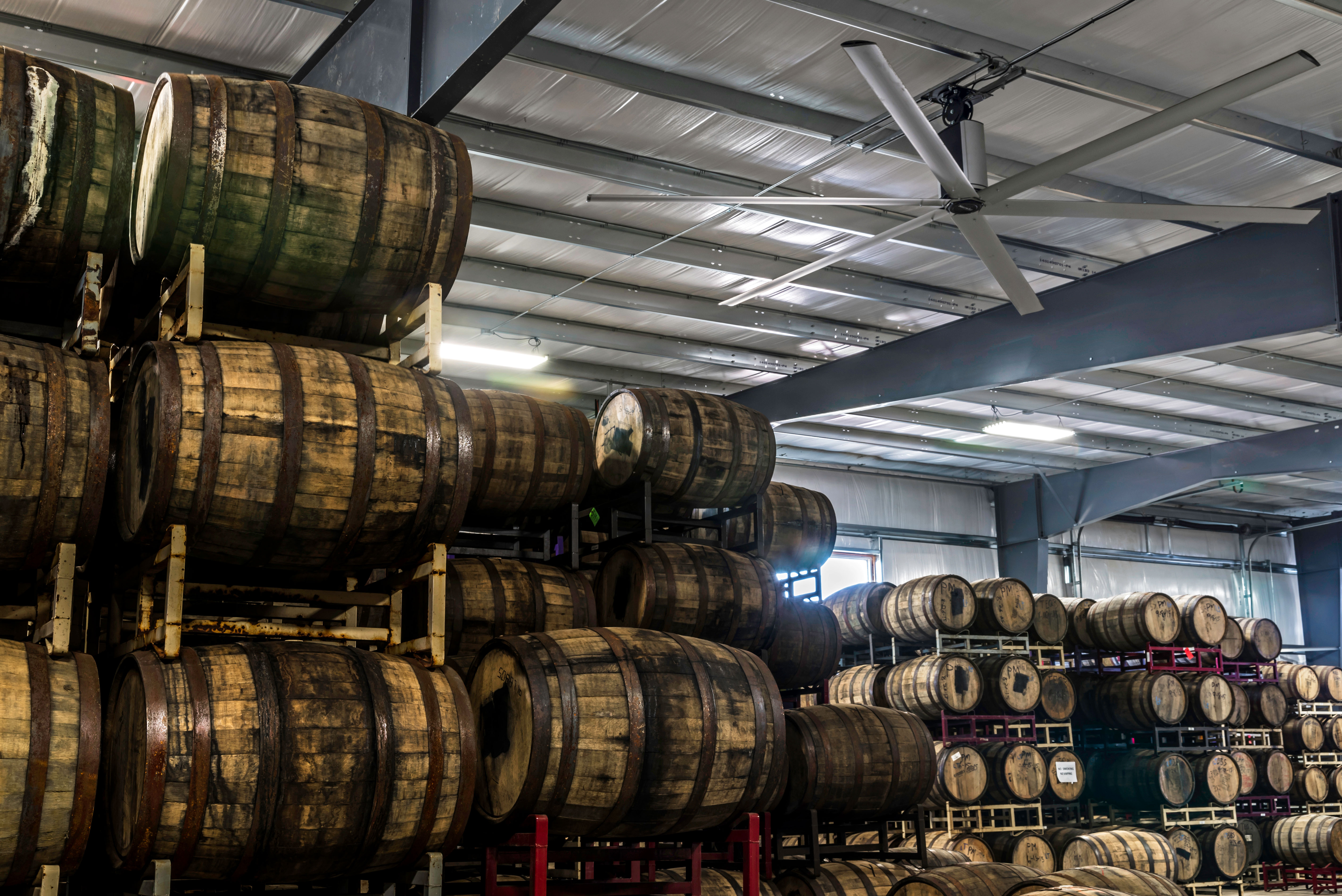 The Glasbern Inn (Pennsylvania) hosts  weddings in a renovated barn that averted installation of an expensive mechanical system and unsightly air ducts by using HVLS fans.

“To run air conditioning in a taproom in the summer would be very expensive,” says Wandtke, who oversees the operation’s technical aspects. As a sustainable company that works to operate with a rigorous environmental consciousness, he and Mollica want customers to enjoy the product and feel good about its place in the broader ecosystem. An AC system running at maximum capacity would be antithetical to that.

It’s useful to know how deep Central Waters’ environmental practices run: They source locally, which involves membership in a hops-buying cooperative. The company is one of seven breweries in the Midwest Hops and Barley Coop, established in 2011 to restore hops growing to Wisconsin (most are otherwise grown in the Pacific Northwest). Barley growing is also making a comeback in the Badger State—a trend that Central Waters is a large part of as the biggest customer to Briess Malt, an intermediary processor three miles away.

Still, Mollica points out that environmental sustainability isn’t worth much if the business isn’t sustainable. They had to keep the taproom comfortable to draw crowds. The solution was to install MacroAir’s high-volume, low-speed (HVLS) fans. Favored in large spaces where mechanical air conditioning is impractical and high ceilings foster temperature layers, HVLS fans are often found in manufacturing facilities, warehouses, auto dealerships, big-box stores, and athletic facilities, The fans move a large volume of air to substantially increase human comfort. “The air feels fresher and cooler,” says Wandtke. It also feels better to pay smaller energy bills. Pairing HVLS fans with your HVAC system can reduce the costs of heating and cooling by 20 to 30 percent, according to Jim Stahl, applications manager at MacroAir, the company that manufactures the fans used at Central Waters Brewing. “You can raise the thermostat at least five degrees in summer, but it feels the same.”

As with ceiling fans in residential applications, reversing direction of the fan rotation redistributes warmer air from the ceiling to the floor during the winter months. Wandtke says the brewery has a vaulted ceiling that is 18 to 20 feet high; without the fan, the temperature between the ceiling and floor could differ as much as 22 degrees.

“Those are hard-dollar returns,” he says. “But there are also many ancillary benefits, like heating and cooling the staff and eliminating moisture.” Central Waters also uses two MacroAir fans in its barrel-aging warehouse, a 16,000-square-foot facility where 3,000 oak barrels contain beer, and the barrels sweat. There, the fans dry the barrel’s condensation that could lead to mold and mildew. Industrial application of these larger fans, which range in size from six to 24 feet in diameter, address human comfort, moisture deposits, and other issues. The largest MacroAir HVLS fan moves 22,000 cubic feet of air and can be located 115 feet from the next fan. In warehouses with forklifts, it can eliminate hazardous slipping conditions from moisture condensing on the floor. At the Valencia Airport (Spain), the MacroAir fans reduce electrical use across its terminals by 1,528 kWh per day, which adds up to an annual savings of $192,700 (40 percent savings); ROI was achieved there in 1.3 months of installation of two fans.

Stahl says the product is advanced from previous models of HVLS fans, as it’s less obtrusive visually and aurally. The advancements are from a breakthrough in motor technology that enabled MacroAir to eliminate the gearbox driven motor and replace it with a direct-drive motor. The sound of moving parts is replaced with a whisper of air movement, a distinct benefit over earlier-generation gear-driven fans.

The reduced noise features of MacroAir fans are particularly valuable in hospitality settings (e.g., a historic Pennsylvania barn that hosts weddings) or where animals are involved (e.g., dairy barns and equestrian centers). But even if the raucous nature of a taproom might not require silence, comfort is appreciated everywhere—almost as much as the foam on a hearty Wisconsin stout.

Find out more about MacroAir at macroairfans.com.