Sustainability meets community at Bloomberg’s new European headquarters—completed in October 2017 in the heart of London. The 10-story facility earned a 98.5% BREEAM rating, the highest score for an office building to date—leading some to call it the world’s most sustainable office space.

The facility was designed to encourage interaction both within the office and the surrounding community, says Michael Jones, senior partner at Foster+Partners and the project architect. “Sustainability was something that underpinned every part of the project, and not just in simple terms but in its broadest sense—the well-being of people,” Jones says. “There are lots of elements of the building that make life better for people in the city. It’s about giving something back and not just occupying a site.”

The facility is composed of two buildings united by pedestrian bridges, taking up a full city block. The bridges cross Watling Street—an ancient Roman road that runs through the site—and the home of the Bloomberg Arcade. The arcade sits under a covered colonnade with restaurants and cafes at ground level. It’s become a key route for people traveling around the city. At the ends of the arcade and front of the building, public plazas are designed to provide civic meeting places for community members. “The building is located in one of the most dense parts of the city and there are very little breathing places,” Jones says. “We set the building back to create these public spaces and offer a place for people to pause for a minute and alleviate the crowds.”

The outside of the building is done in sandstone with a series of 117 bronze fins that offer more than a unique design element—they’re an integral part of the building’s natural ventilation system. The fins vary in scale, pitch, and density according to the orientation of the building’s outer walls and solar exposure. The “breathable” walls open and close based on weather conditions, resulting in a reduced dependency on mechanical ventilation and cooling equipment. “People respond better to environments that change, that ebb and flow with the temperature and sounds and light,” Jones says. “The breathable walls are like opening a window at home. You feel better. It’s the same kind of effect on a much larger scale.” 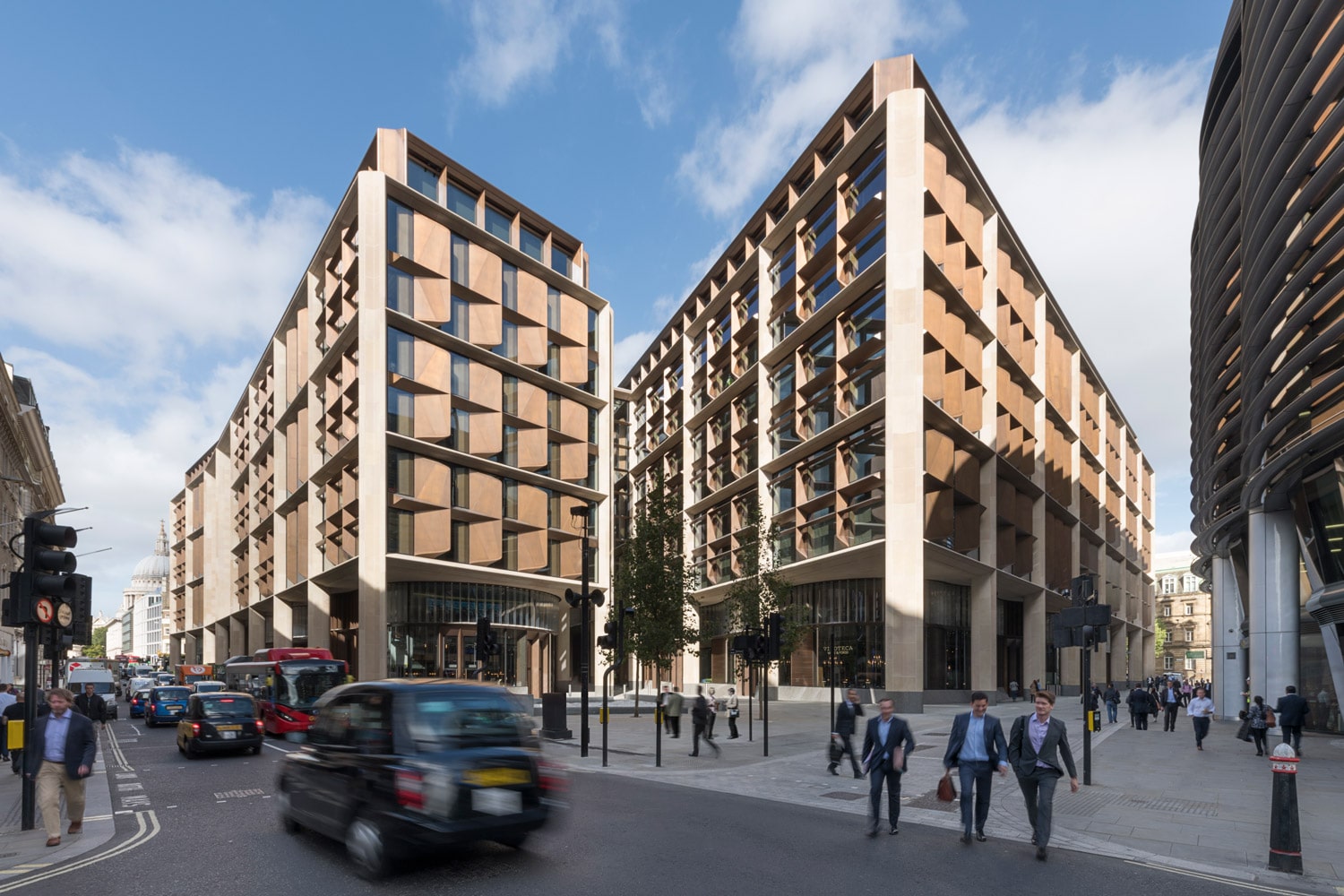 It’s hard to miss the building’s distinct three-dimensional looped-ramp—it flows across the whole building. The ramp has a two-prong effect, as it’s designed to encourage conversation while not impeding the flow of people and also acts as a chimney. Natural air flows up the ramp to the building’s atrium and out onto the roof.

Building visitors enter into the “vortex”—a space defined by three inclined, curving timber shells—where everyone can catch a ride on the building’s high-speed custom-designed exterior-facing elevator. The elevator takes visitors to the heart of the building—the sixth floor—a communal place everyone travels through. “The inside is driven by collaboration and interaction and supports teamwork in the best way possible,” Jones says.

Petal-leaf aluminum ceiling tiles assist in the heating, cooling, lighting, and acoustics of the building. The large surface area and high heat-transfer efficiency of the petals, combined with a chilled water coil that sits behind the tiles, reduces energy use—making for a first-of-its kind integrated cooling system. The tiles also assist in the reflection of light. Rather than using a traditional office fluorescent light system, the building has 500,000 LED lights—using 40% less energy. “The tiles are a pivotal part of the design and really pushed the boundaries of existing thinking,” Jones says. The Bloomberg building uses an estimated 73% less water than the typical office building. Collected rainwater from the roof, cooling tower blow-off, basins and showers, is treated and recycled to be used in the building’s vacuum flush toilets—creating a net-zero flushing system. The toilets also use significantly less water than the typical toilet—0.6 to 0.8 liters compared to the standard five liters.

An on-site Combined Heat and Power generation center supplies heat and power in a single efficient system, estimated to reduce energy consumption by 35%. The CHP generation center converts natural gas to power and uses any wasted heat generated in the process for heating and hot water, or to generate cooling. Photovoltaic cells on the roof of the building convert light energy into electricity to supply additional power to the building—enough power to run eight residential homes. In addition, carbon dioxide–detecting controls that adjust airflow based on occupancy are installed around the building. On a typical floor there are around 775 workstations and 68 carbon dioxide–detecting sensors.

The Bloomberg building is also a zero-landfill facility—and has been since construction began in 2010. Instead of going to the landfill, waste is composted or converted to energy. The workplace uses a waste system that allows a greater proportion to be recycled, including a new system for recycling coffee cups.