Sierra Nevada is Leading the Way with Sustainable Beer Production You might not think about the inherent overhead—both environmental and economic—of the cold beer in your hand on a sunny afternoon, but every year U.S. breweries pour about $200 million into energy costs, according to the Alliance to Save Energy. The brewing process itself requires significant inputs, including compressed air, lighting, refrigeration, and, of course, plenty of fresh water. Many breweries around the country have, not surprisingly, begun to move away from expensive and polluting fuels and industrial practices and toward a more sustainable industrial footprint.

Leading the pack are brewers like Sierra Nevada Brewing Co. “At Sierra Nevada, we are always chasing perfection, pushing ourselves to constantly do things better,” says Cheri Chastain, sustainability manager at Sierra Nevada. Sierra is intensely focused, not only on the ingredients that go into their beer, but in their company’s image and impact. The Details In 2014, Sierra was one of a few small craft breweries that celebrated the EPA’s proposed Waters of the U.S. rule, knowing it would help them find the clean, tasty water they need to make equally tasty beer. They put similar passion into their facilities, including incorporating the LEED green building program as a resource when expanding their Chico brewery in California.

So when it came time to build a new facility in Mills River, North Carolina, Sierra knew they wanted to go all in and attain LEED certification at the highest level. “The Mills River brewery gave us the opportunity to start from the ground up and build the most efficient yet elegant facility we could,” Chastain says. With an expert architectural team from Russell Gallaway Associates (RGA) in the driver’s seat, Sierra was able to infuse a greener palette into every design and functionality choice. “Sustainability was integrated into every facet of the construction project, from materials selection to construction waste management,” Chastain says.

That included a more than 500,000-gallon rainwater collection storage system, which is used for irrigation of landscaping and toilet flushing, conserving potable (and brewable) water. The facility’s energy system is as unique as its look, with nearly 2,200 solar PV panels on the warehouse roof and on nine tree-like canopies in the public parking areas, as well as an onsite wastewater treatment plant that includes an anaerobic digester that produces biogas to generate additional electricity using Capstone microturbine technology. 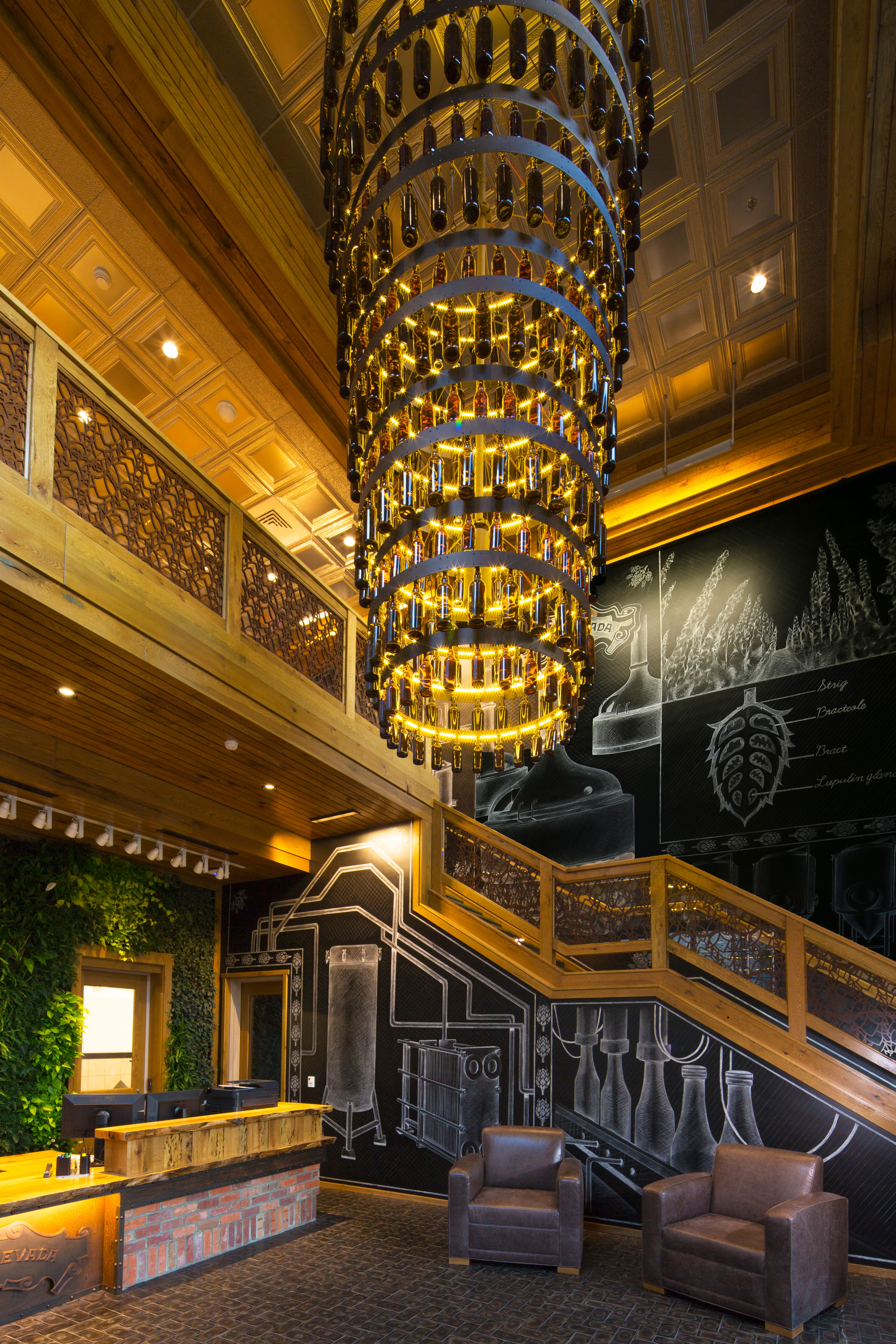 Chastain says Sierra’s energy models estimate an energy efficiency cost savings of about 49.5%. The renewable energy technologies provide about 32% of the facility’s energy needs, while the energy they must purchase is offset by helping to fund local solar projects through NC Green Power.

The Look The look of the facility was similarly crucial to Sierra’s vision. It had to feel like the small, traditional craft brewery your mind might conjure up while you sip a pale ale, while being both a state-of-the-art production facility and a great place to work. The extra costs of adding soaring glass windows, stone, and wood accents reminiscent of traditional breweries as well as purely visual touches like ironwork railings and a chandelier made of glass beer bottles were well worth it, as were the costs of providing employees sustainability education and encouragement, as well as ample bike parking and electric vehicle charging stations with preferred parking. 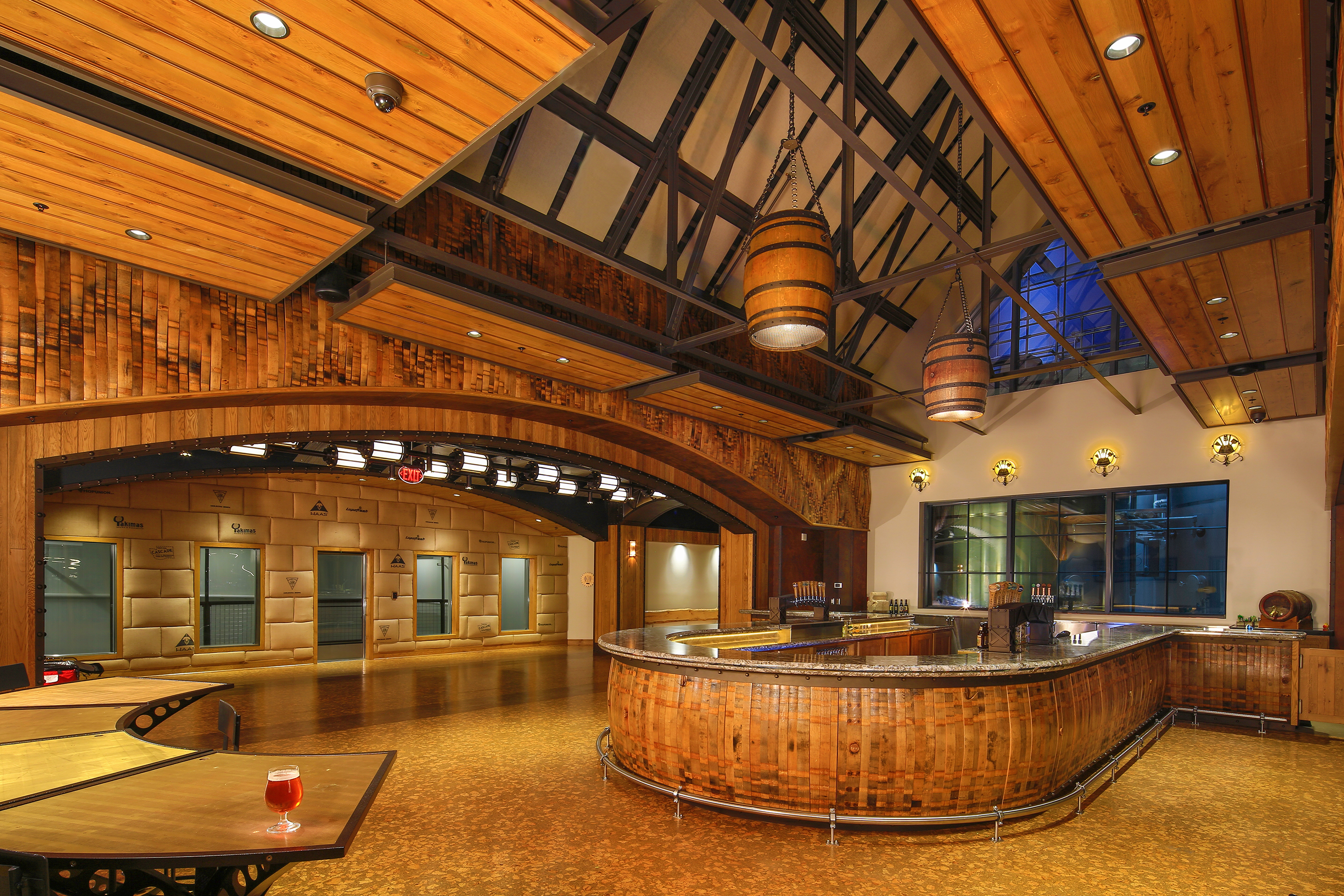 The attention to detail even extended to how the facility approached its place in the surrounding community. During the build, Sierra was able to achieve an incredible 81% diversion of construction waste from landfills while utilizing both recycled materials (11% of the total building material content by value) and regional materials (21% of materials and products were sourced within 500 miles). And those materials Sierra did choose for its facility were highly scrutinized for any chemical contaminants that might damage air quality, human health, productivity, environment—or beer taste.

Other than some crazy weather patterns delaying construction, Sierra’s biggest hurdle was finding builders willing to see their vision through to completion—and to their admirably exacting standards. “Making sure all contractors were onboard with our LEED efforts was probably the biggest challenge.  Having construction managers who reinforced our desire to achieve LEED certification went a long way to making sure we received as many credits as we did,” Chastain says. Luckily, their chosen team of contractors was able to help Sierra pull off a platinum win in the end, though the they did hit one snag that Chastain says knocked them off balance.

“When we began construction on the greenfield site, we carefully removed the timber from the site, had it locally milled and kiln dried, and incorporated that timber back into the construction of the brewery as moldings, doors, art features, tables.” But what they didn’t know was that the material could not be counted toward LEED certification—a letdown, but one Sierra accepted as part of the learning curve. “We would have done this anyway, but it surprised us that we couldn’t count it for LEED credits.”

The Mills River brewery made history in June 2016, when it became the first production brewery in the U.S. to achieve LEED Platinum certification. “I would like to think that we have demonstrated that even though there might be increased costs, we have built a building that will be more sustainable over the long-term and provide a comfortable space for the occupants, ultimately resulting in reduced long-term operating expenses,” Chastain says. “We have shown that if you put in the effort, anything is possible.”