10 Resilient Building Examples for the Next Generation of Building

Resiliency is simply the ability to endure. In green building, resilient building means designing for increased longevity with the use of sustainable materials, withstanding extreme weather brought on by climate change, and having a more positive impact on the environment.

“I see resiliency as a key component in green construction and design,” says Jeff Yelle, director, OSB/EWP technology at LP Building Solutions. “When products are able to withstand greater challenges from the environment and weather events, this translates to less rebuilding and, in turn, less waste and less energy consumption,” Yelle previously told gb&d.

As an urban ecosystem embedded within the city, Schoonschip Amsterdam provides a new model for sustainable living. Photo by Alan Jensen

Perhaps the tour de force of resilient building examples is Schoonschip Amsterdam for its unrivaled ingenuity and holistic design. What was once a fascination for floating homes has become a circular and self-sustaining community housing nearly 100 people on the Johan van Hasselt canal.

Using hundreds of solar panels and green roofs to efficiently power their floating homes, Schoonschip residents share electricity on one grid, which creates a social sustainability system as well. “If I’m at home and I generate electricity, and my neighbor is putting on the washing machine and doesn’t have electricity at the time, it’s all interconnected in a smart grid,” says one Schoonschip resident, Yvonne Van Sark, on the interconnectedness, in a previous gb&d article.

Guide to Sustainable Fabrics for Beginners 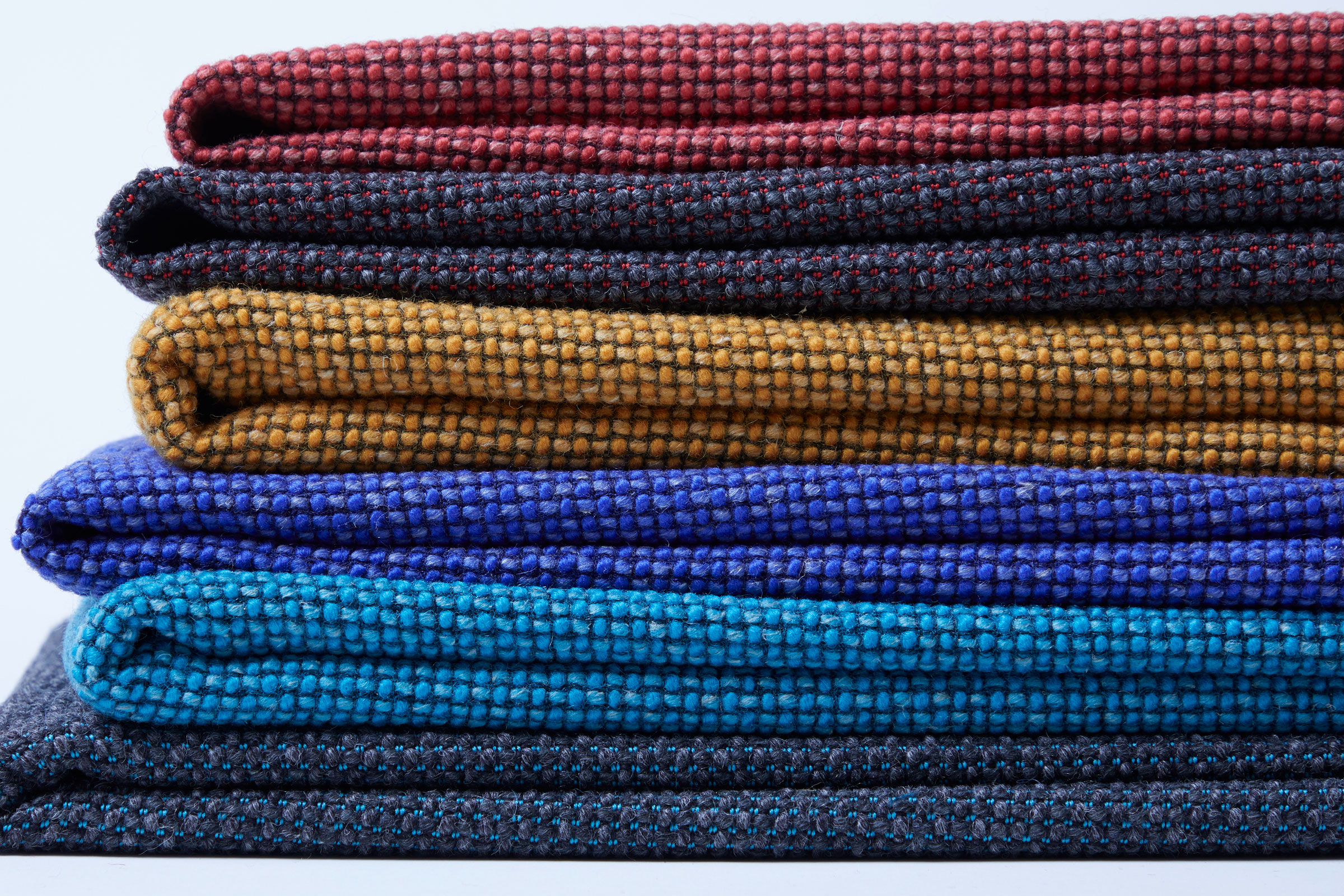 Schoonschip’s infrastructure was designed with the idea that each home takes some responsibility for the community as a whole. Every household’s energy, waste, and water lines are connected beneath the surface, and a jetty runs lengthwise with arms branching off like side streets to create micro-communities. By giving the residents the power to problem solve, they’ve created a culture of sustainability.

Historically libraries have been in the center of cities and communities all over the world, whether they are big, small, underfunded, or overcrowded. When Dayton Metro Library decided to invest millions in their library system, they did so with resiliency in mind. “We set out to build facilities that were both aesthetically pleasing and welcoming to all patrons, creating a shared space that would bring the community together and improve access to everything from education resources and job readiness programs, to art, music, and technology,” said Jayne Klose, community engagement manager at the Dayton Metro Library, in a previous gb&d article.

Upon restructuring, they partnered with engineering design firm HEAPY to ensure their resiliency dreams could be realized in the 224,000-square-foot space. The main library branch in Dayton is now LEED Gold–certified, noting its reduced water use, energy efficiency, and community connectivity. It includes plentiful natural light and functional space, not to mention a rough savings of $1 million dollars in energy costs in the coming years. “Good planning and design are useless without ensuring appropriate maintenance and long-term building optimization because building systems can drift over time and become less efficient,” said Nicholas J. Andrews, project manager at HEAPY, in a previous gb&d article.

Dayton Metro Library on average now uses 35% less electricity than a standard library and 38% less water than a similar building. The renovated branch and its counterparts now cost less to maintain and operate. which adds to Dayton’s commitment to resiliency in the community.

The impressive 2 million square-foot stadium in Atlanta is a great resilient design example due to its array of green energy commitments. An estimated 4,000 panels installed throughout the project, including some at eye level, can power nine Atlanta Falcons games through solar energy alone.

The $1.5 billion dollar project, completed in 2017 and designed by HOK, also displays a massive halo board surrounding a larger-than-life video screen containing 63,000 feet of LED lighting. The choice to use LED lighting all throughout the project reduces energy usage by 60% and lasts 10 times longer than standard lighting options.

The Mercedes-Benz Stadium wouldn’t be a leader in resilient design without addressing water usage. Having gone underground, they installed a sophisticated stormwater management system that effectively reduced water usage by 47%. “Everything about this building was designed very intentionally to be innovative and groundbreaking from an environmental standpoint,” said Scott Jenkins, stadium general manager and chairman of the Green Sports Alliance, in a previous interview with gb&d.

The Beach at Expedia Group

Another resilient building example sits slightly north of downtown Seattle: The Beach at Expedia Group’s HQ. Completed in 2019, Surfacedesign was commissioned to rework the 2.6 acres of waterfront property to highlight the beautiful coastline and improve its longevity and resiliency. The renovated coastal land connecting to the Elliott Bay Trail improved safety for cyclists and joggers, whereas it once succumbed to dangerous storm conditions. Upon rebuilding the property, local material reclamation and adaptive reuse were high priorities and among the strategies to increase the land’s resiliency. By including reclaimed stone and knotty spruce from a defunct log mill in neighboring Port Angeles, a naturalist setting for play and informal meetings took form.

Designed to enhance the beauty of Washington’s rugged coastline, they used several native grasses and perennials to create a space akin to what might be found in nature but also one that can withstand The Sound’s stormy weather and rare but increasing heatwaves. Native plants like gumweed and wild buckwheat create texture and rhythm along the winding coastal meadow disguising their high weather tolerance for a less useful but dreamy landscape.

To reduce fertilization and maintenance for the coastal habitat, an advanced soil program was critical to the integrity of resistant soil. Using harvested soil that remained healthy pre-build, it was then taken and used to inoculate additional soil blends to increase the soil’s ecological health.

Global design firm Fentress Architects redesigned the Miami Beach Convention Center in 2020 and was awarded LEED Silver status by the USGBC, making a huge leap in the direction of resilient building examples in Miami.

Known to hold prestigious events like Miami Art Basel and eMerge America, the 1.4 million-square-foot convention center was designed to mimic Miami’s vibrant landscapes and culture. The exterior facade of the building displays fin-like aluminum forms to exude a wave-like appearance. The fins respond to the sun’s orientation and filter light through the “wave,” making an easy transition from day to night.

One more crucial aspect of the build was to move integral building systems to the second floor so as to create a resilient design that can withstand hurricanes common to the area. “This exciting milestone for the MBCC represents the culmination of a long journey, demonstrating the MBCC’s serious commitment to resiliency and sustainability,” said Freddie Peterson, general manager at the Miami Beach Convention Center, in a previous gb&d article.

Situated on the coast of Massachusetts in South Dartmouth, a Boston couple’s dream comes to life through the work of ZeroEnergy Designs. The 3,600 square-foot multi-level home needed to be a respite from the city and was designed in a way that the couple could age peacefully. Given that coastal buildings tend to require more maintenance than those inland due to their proximity to saltwater and its corrosive properties, the team used materials like stainless steel on the home’s exterior.

To offset energy consumption, the roof is accented by a photovoltaic array that produces nearly the energy that’s used within the home. Highly insulated and featuring exterior shades that also help reduce indoor temperatures and increase the home’s comfort. “If it’s not comfortable, it’s not a great space,” said Stephanie Horowitz, managing director of ZeroEnergy Design, in a previous gb&d article.

Prompted due to the devastation of Hurricane Sandy, GAF, the largest roofing manufacturer in North America, made the move to Parsippany, New Jersey, as a safety precaution for future storms. The new HQ building focused heavily on resiliency and as a result, became the first building in the world to earn the LEED IPpc98 credit for resiliency.

As roofing experts, they used proprietary roofing insulation that can withstand the damaging effects of future storms. Architects also made a point to build GAF’s headquarters and access roads on elevated land to safeguard against flooding.

In order to keep employees safe and avoid pauses in manufacturing, GAF installed major power systems with backup generators for emergency situations. Concerning day-to-day functions, in the event of a power outage stands an atrium lit by the sun enabling work to resume in the short term in the event of a power outage. Monthly safety training prepares employees for worst-case scenarios so GAF innovators can continue leading the industry.

What has become Zibi was once land of the Algonquin Nation, and due to its history of industrial uses, the soil was quite contaminated. “This transformation has involved significant demolition, preservation, and site remediation across 34 acres to allow for the development of a full mixed-use sustainable community,” Westeinde previously told gb&d. Connecting Ontario and Quebec, and creating jobs in the process, the borderless community will be at 100% net zero carbon becoming a sustainable and resilient building example for cities to come.

Designed by Richard Franko, partner at Mithun, whose love of educational spaces primed him to design the 56,400-square-foot Louisiana Children’s Museum (LCM) in New Orleans. The museum is a fresh take on resilient design examples featuring an integrative indoor-outdoor construction.

Due to New Orleans’ geography, and the chilling aftermath of Hurricane Katrina, the museum was designed to be elevated so as to withstand floods. “As that area becomes a receptor for stormwater during storm events, it will be able to accept water onsite and allow it to recede gradually,” Franko said in a previous gb&d article. They’ve even added an interactive cistern to collect rainwater for irrigation that both functions as entertainment and another element of education. The facades were designed to meet strict wind defense standards and passive shading reduces heat and increases radiant cooling throughout.

Paying special attention to the land’s topography, architects created outstanding views boasting the world’s largest collection of mature live oaks in the world. The museum has since gained LEED Gold certification and serves 250,000 visitors per year.

Designed by Brooks + Scarpa, Los Angeles’ The Six is a vision of resilient affordable housing. Built with compassion for disabled veterans, the 52-room building, including both studios and one-bedrooms, in addition to communal spaces, is focused on providing comfort beyond the pedestrian understanding of the word.

Although many resilient building examples are focused on adhering to environmental concerns, another aspect of resiliency is a consideration for livability. How does a building affect the wellness of its inhabitants?

Tenants of The Six are commonly at one point homeless and the facility acts as a beacon for those in need of space to heal. The idea is to both reduce strain on crisis centers and shelters while setting an example for what can be done with a bit of ingenuity. Green roofs provide a connection to nature and tenants have the ability to nurture plants alongside their neighbors. Increased airflow and natural light mitigate energy consumption and contribute to a more restorative environment.

is a digital marketer traveling the US in her RV. When she’s not working, she can be found enjoying the outdoors with her dog and partner.